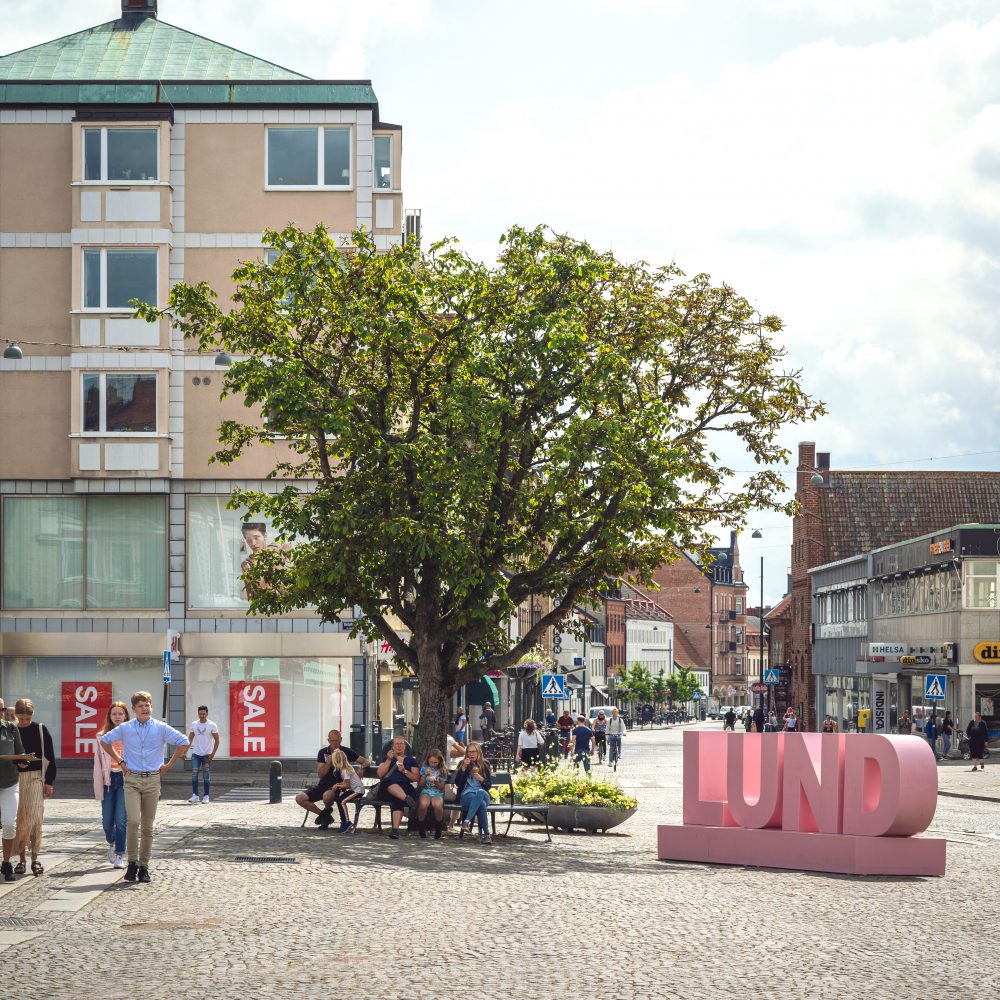 Over the last 10 years, Lund has implemented a series of pro-cycling and pedestrian-friendly transport policies, leading to a decrease in car use and a rise in the uptake of active transport options.

In 2017, just two years after the Paris Agreement, Sweden committed to becoming carbon neutral by 2045,[1] one of the first countries in the world to commit to such a target. Overall, environmental awareness has grown rapidly in Sweden since the 1970s and this has also been reflected in Lund’s environmental policy.

In 1999, the city developed a new Environmental Code, which streamlined all previous environmental acts and included concepts such as the polluter pays principle.[2] Since the 1970s, the city has been implementing a series of hard and soft measures to improve transport management in particular.

Today, the city has a well-developed transport plan (LundaMaTs), which it has further developed to consider wider environmental, economic and social sustainability (LundaMaTs II). The long-term ambition of this plan is to encourage the use of active transport (walking, cycling and public transport), while also reducing the use of private vehicles.

All measures have been supported by suitable levels of funding as well as a highly engaged, motivated and well-educated population.[3]

The small size of Lund (25.75 km²) lends itself to active transport and, with significant green space, the city is an attractive environment for pedestrians.[4] The measures taken to facilitate the LundaMaTs transport plan were a broad mixture, including rezoning, the establishment of partnerships, education and awareness campaigns, the redesigning of outdoor spaces, and pro-cycling measures.

Rezoning: The city initially carried out a series of rezoning measures including closing several streets and squares to vehicular traffic and limiting bus traffic to certain times of the day.

Redesigning outdoor spaces: The city recognised that the uptake of walking could be even greater for both disabled groups and non-disabled groups if Lund improved accessibility and made the city’s open spaces safer with lighting, through project proposals that could be included in a pedestrian management plan.

Pro-cycling measures: At the start of the programme, cycling was already popular across the city, and Lund is recognised as one of the most popular places to cycle in Europe. The municipality undertook a mixture of policies to further capitalise on this popularity, including:

In particular, the infrastructure programme facilitated the construction of 260 km of high-quality bike lanes, more than 5,500 cycle parking spaces and multistorey parking and bike storage facilities with servicing at the central train station. [5]

Partnerships: Partnerships between public and private institutions and transport and traffic companies have been established in Lund.

The city has supported these measures to improve active transport through:

Lund has had significant municipal and national government funding for the measures, mainly due to the wider national ambitions of Sweden. The level of annual funding for active transport in Lund is difficult to estimate. However, a basic budget equivalent to approximately GBP 300,000 is spent on maintenance. Projects to improve provision are additional costs – for example, the equivalent of GBP 2 million for the creation of tunnels and an investment of more than GBP 7.1 million between 1998 and 2005 as part of the LundaMaTs programme.[6] One source states that funding has varied between GBP 1.5 million and GBP 5 million.[7]

The LundaMaTs programme consisted of a mixture of policies implemented over a decade which allowed the city to adjust to the changes, to spread out the costs and to create long-term behavioural shifts among residents.

In 2011, 43 per cent of all trips in Lund were taken by bicycle, and in the preceding decade, there was no increase in car use. In fact, in 2010 there was a measured drop of 2 per cent in the kilometres travelled annually by car compared with the levels seen in the previous year.[8]

Looking ahead, the already well-connected bus network will be further supported by the introduction of a tram network that is due to open in December 2020 to facilitate faster public transport, greater capacity and an environmentally cleaner system.[9]

The experience of Lund shows that a balanced and well-thought-out mixture of policies implemented over a longer period can help to facilitate behavioural change among residents and to address funding constraints.