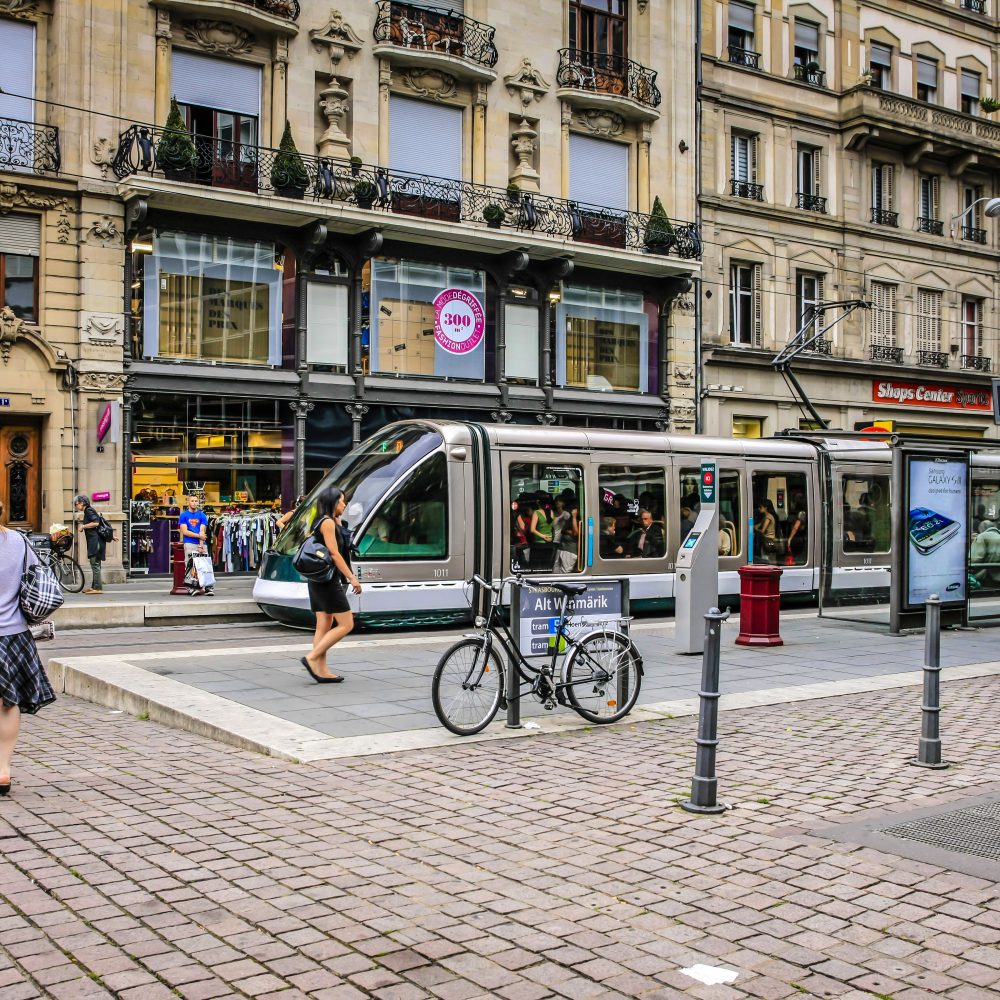 Driven by a longstanding ambition to improve air quality, Strasbourg has been removing private vehicles from the city centre while facilitating the uptake of active and public transport. The city has achieved this through a mix of policy options detailed in its Urban Mobility Plan.

In Strasbourg during the 1980s, the growing use of private vehicles was increasing congestion, air and noise pollution, as well as the number of accidents. In the 1990s, cross-border traffic with Germany was an additional problem, given that Strasbourg sits on the busiest road link between Baden and Alsace. In 1990, approximately 240,000 vehicles per day were present in the city centre. This congestion was exacerbated during the peak holiday seasons when visitors flocked to Strasbourg to see its historic buildings and monuments.[1]

To address these issues, Strasbourg’s Urban Mobility Plan, also known as the first plan de circulation,[2] laid out initial ambitions for reducing the use of private vehicles. The main aim was to build two new tramlines that would serve the city centre. To facilitate this engineering project, Strasbourg implemented a number of transit-oriented policies. These included:

The main goals of the approach were to:

The policy approach was guided by the Urban Transportation Planning Document (PDU), which covers Strasbourg’s transport policies for 10-15 years, as required by national law, to address air quality issues. The guidance document is seen as a tool for encouraging local authorities to integrate their transport policies into broader city planning policy.

Three private consultancy firms developed the PDU. Its eventual adoption required ratification from all municipalities in Greater Strasbourg (CUS), the CUS Council, the regional and national governments, and civic organisations. The tramway department and the Compagnie des Transports Strasbourgeois were responsible for assessing and reviewing the progress of the plan and its impact.

These institutions acted as major levers for the policy’s implementation and financing. CUS had significant governance powers as the organising authority, achieved through devolution from the national level. The state implemented structures to allow local authorities to manage mass transit services. This currently enables CUS to coordinate transit with urban planning processes and service provision.

The main sources of funding for public transport systems are the national government, regional and local authorities. The local authority supplies financing through a transport tax, the versement de transport, which places a levy of 1 per cent on private wages paid within the Greater Strasbourg area.[3] Although the tax does not provide full financing for all the projects, it is of benefit. The system cost €97 million, which worked out at a reasonable industry cost. Most parking measures are delivered through public-private partnerships between the city and businesses.

The mayoral contest held before the implementation of this plan centred on urban planning changes. The winner, Catherine Trautmann, was strongly motivated to carry out the plan and to recruit a more diverse team of professionals into the public bodies tasked with delivering the programme.

There was strong opposition to the scheme, particularly from businesses operating in the city centre who believed that the policies would result in a loss of income. Moreover, they were concerned that works to install the trams would restrict access even further. These negative sentiments resulted in the creation of an opposition campaign. However, the local authority worked hard to develop an engaging communications strategy that would allay people’s fears.

The new mayor brought the political vision required to make the plan acceptable among residents. Her campaign was built on transforming the city’s transport system and, despite opposition, she continued to pursue this goal throughout her term.

Due to this opposition, Strasbourg undertook an extensive consultation process with local residents, businesses and associations. There was also an accompanying awareness-raising campaign by the city authorities and transport operator. The campaign sought to shift entrenched travel behaviours and was supported through a communications strategy with a city symbol (Bruno the bear) to add a face to the campaign.

Furthermore, the city provided landscaping to improve the quality of the environment along routes through social housing projects. This work helped to gain support for the transport plan.

Following the implementation of policies outlined in the Urban Mobility Plan, by 2000 the number of vehicles in the city centre had fallen by 16 per cent,[4] to a third less than the figure that would have been expected on the basis of population growth. Strasbourg achieved this success despite an overall increase in traffic volumes across the municipality. However, this traffic reduction in the city centre may have resulted in a transfer of traffic to surrounding roads.

Nevertheless, data for the tramlines do indicate that more people shifted to using public transport. During its first year, Tramline A carried 68,000 passengers a day, potentially contributing to a 17 per cent reduction in traffic entering the area.

Furthermore, contrary to initial expectations, pedestrianisation increased property values and trading figures as the quality of life increased. And by 2015, 125 jobs had been created across these projects.

Strasbourg’s Urban Mobility Plan offers lessons for other cities that hope to implement similar initiatives. First, building an engaging and relatable communications strategy is key to driving change, particularly if a programme faces fierce opposition. Second, this strategy should involve extensive stakeholder engagement, while tailoring the communications to the chosen audience. In particular, the benefits for each group must be made clear and communicated. Third, any communications strategy must not be a one-off, but rather a continuous dialogue.

[3] The Prince’s Foundation for the Built Environment (n.d.), “Strasbourg: Regaining the public realm”.