Incentives to use public and active transport: Freiburg, Germany

Incentives to use public and active transport: 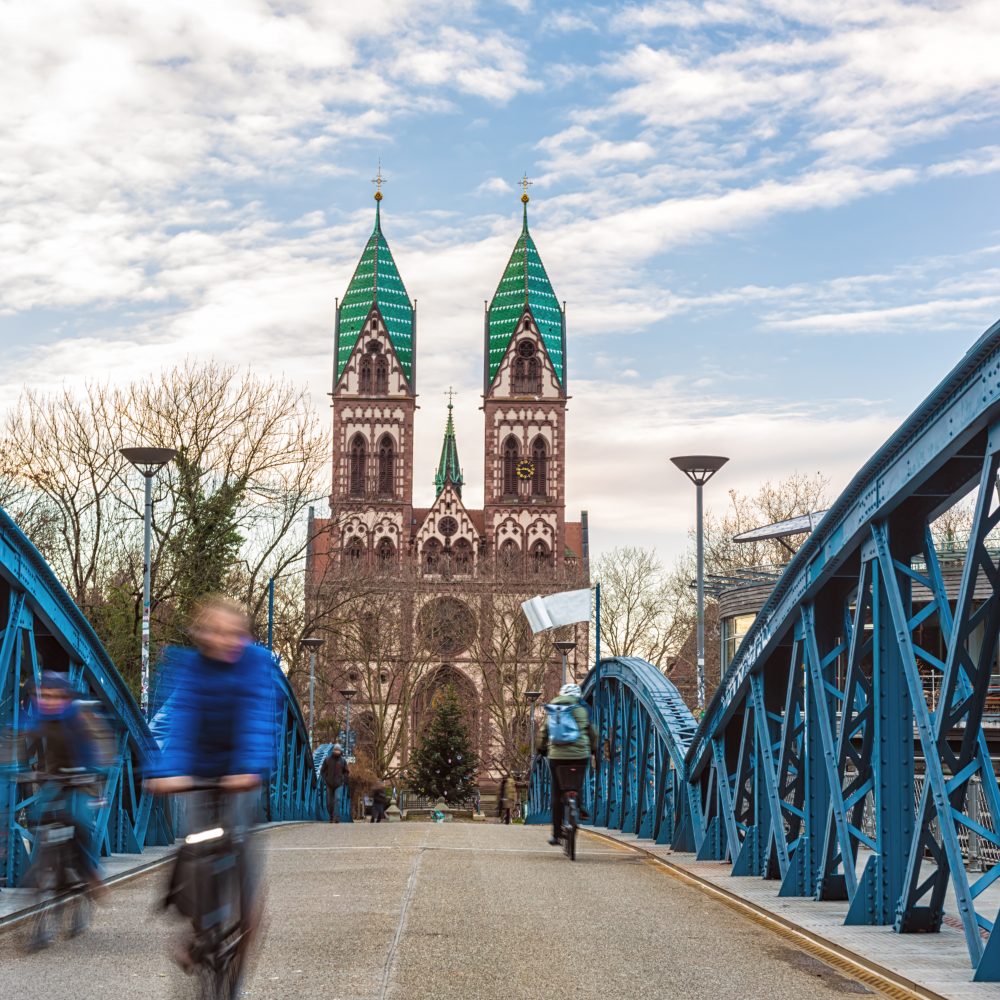 In a quest to cut traffic congestion and environmental pollution, Freiburg has sought to reduce the city’s reliance on cars by better integrating affordable and convenient alternatives such as walking and cycling. Today, more than one-third of residents do not own a car.

Freiburg is a city in which public transport and bicycles are the prevailing methods of transport.

From the 1950s to the 1970s, Freiburg saw an increase in private transport. However in 1969, with its First Transport Plan, Freiburg switched away from policies focusing on private transport to ones that took a more holistic view of the urban community. In the early 1970s, this change saw the planning of an integrated cycling network and a new car-free pedestrian zone in the centre of the old town.[1] Moreover, faced with traffic congestion, city officials decided to maintain and develop, rather than remove, their tram system.

In the 1980s, Freiburg introduced traffic-calming zones to all residential neighbourhoods to discourage the use of cars in residential areas. For instance, parking schemes were introduced, with limited long-term parking and increased parking fees. Neighbourhood associations backed this policy.

The city has ensured that the tram is a convenient mode of transport for residents. The tram system is constantly being extended, with new lines built and existing ones prolonged as needed. This has resulted in 65 per cent of Freiburg residents having a tram stop within 300 metres of their home. Affordability has been another concern for the city, which chose to combine affordable public transport charges with a mobility card model in the 1980s.

Freiburg has doubled the use of bicycles since the 1980s thanks to a number of pro-cycling policies. The average annual budget for bicycle facilities has been €836,000 since 1976.[2] In 2011, bikes accounted for 27 per cent of all journeys.[3] The city has more than 400 km of well-connected cycle routes, with more than 9,000 cycle parking spaces in the centre of Freiburg and at bike-and-ride locations at bus and tram stops.

The city also recognised the importance of having an integrated mass transit system throughout the urban area. Using planning and design, it created a “city of short distances”, enabling high levels of public transport use, cycling and walking. Investment in the transit system and measures to encourage cycle use were coupled with restrictions on car use through road design and traffic and parking management measures.[4]

New developments such as Rieselfeld and Vauban were developed around tram lines and both districts limited car access and parking. All streets were traffic calmed at 30 km per hour or less and were well connected to Freiburg’s cycle network and tram system. In Vauban, more than 70 per cent of households do not own a car. Car owners have to purchase a parking space in a multistorey car park on the outskirts of the development costing US$ 25,000 plus a monthly service charge.[5]

Neither of these developments required a contribution from the city budget. Both were designed to be self financing plans, with costs being covered by income received from selling serviced plots of land to cooperatives, individuals and small builders. Freiburg also has a betterment levy, which allows the city authorities to access one-third of the increase in value on the sale of open land.[6]

The city was able to realise its ambitions to control car use, partly due to changes in federal government funding reforms in the 1970s. During this period, municipal governments were given greater autonomy to direct transport funding as they wished. The state of Baden-Wuerttemberg also funded the initial trial of Freiburg’s flat-rate monthly travel tickets.[7]

Overall, the city’s policies have had the effect of shifting the relative costs of car ownership and use compared to those of public and active transport modes.[8]

The plan faced initial resistance from many residents, especially those who lived in the suburbs. Developers also had a negative response to Freiburg’s approach, demanding fewer restrictions on how they developed the city. These problems were overcome by the city having a clear strategic direction, with good communication and engagement with local communities. Moreover, an increase in service levels and modes of public transport contributed to reducing the percentage of private transport.

Citizen participation has been a critical element of the city’s transport planning since the 1970s and was a significant driver in the shaping of Vauban into a carfree neighbourhood. Freiburg developed its land-use plan in collaboration with the community, with 900 participants.

The city successfully reduced the prominence of cars, while increasing the use of sustainable transport modes. More specifically, it achieved the following impacts.[9]

Freiburg is internationally recognised to be a leading green and sustainable city. Its successful transition to sustainable modes of transport offers
valuable lessons for other municipalities and cities globally. First, public acceptance of car-restrictive measures is closely linked to the cost and quality of the alternatives provided. Residents are more likely to substitute their car ride for a tram journey if the tram is reliable, clean and affordable. Second, active stakeholder engagement is important in order to overcome (and even prevent) opposition to sustainable transport policies. Residents, businesses and civil society groups must be given a voice and listened to. Third, the availability of national funding – for example to subsidise ticket prices for a limited period of time – can help to introduce new services and limit the costs for city authorities.